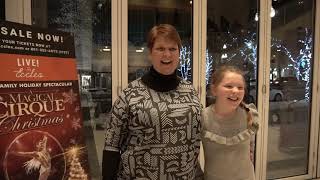 The reviews are in and it was a hit!
Empire Artist Yusaku Mochizuki (Mochi) closes the curtain on a magically successful tour with A Magical Cirque Christmas!

Thanks to Magic Space Entertainment and everyone who made this tour possible.

Empire Artists is the exclusive international agent for Yusaku Mochizuki.

・・・・・PRESS COVERAGE / REVIEWS・・・・・
Triangle Arts & Entertainment / by Dawn Reno Langley
・http://triangleartsandentertainment.org/2019/12/a-magical-cirque-christmas-soared-on-dec-1st-at-dpac/・
Part of the magic of this show is … actually, magic! America’s Got Talent contestant Yusaku “Mochi” Mochizuki (from Japan) is on the program as a juggler; but his fusion of visual art, dance, and juggling truly appears more magical than the average juggler. He mesmerizes with his art/sport, and has performed all over the world as a top diabolo-juggling artist. The precise control and amazing speed of his performance drew gasps from the audience, especially the little ones who wanted to know it was done.

The Wichita Eagle / by David Burke
・https://www.kansas.com/entertainment/article238329048.html・
And a featured act is Yusaku “Mochi” Mochizuki, a juggler who advanced to the quarterfinal round of “AGT” last year.
“He does this incredible juggling act that’s synchronized to a screen behind him. It’s mesmerizing,” Curatolo said. “Every single act is just one ‘wow’ after another.”

Sioux City Journal / by Bruce Miller
・https://siouxcityjournal.com/entertainment/review-aerial-acts-land-in-winner-s-cirque-at-the/article_fa950ea2-22e2-11ea-8757-a71cf2fc37ce.html・
More “America’s Got Talent” than Cirque du Soleil, the show featured several graduates from the former franchise. Yusaku Mochizuki juggled in sync with visuals on a screen behind him; Archer did a mentalist bit that wowed Penn and Teller.
While Archer settled for laughs, Mochizuki aimed for dropped jaws. His well-timed juggling (particularly when the lights were dimmed) was impressive, even when he added in tap dancing.

SignalsAZ / by Kristina Abbey
・https://www.signalsaz.com/articles/a-magical-night-at-findlay-toyota-center/・
For two hours audience members were enthralled by the wonder, enchantment, and fun by the performers of Cirque. The show opened with Emcee John Archer who began with jokes and an impressive card trick. To follow Archer were jaw-dropping acrobatics, balancing acts, and even an impressive performance from America’s Got Talent quarter-finalist, Mochi.