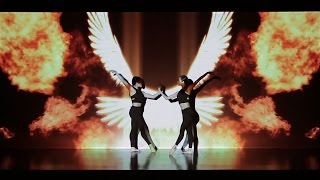 Empire’s world-famous performance group enra is bringing their unique art, the precise synchronization of digital computer graphics with genre-bending live performance, to wider and wider audiences, with the release of a brand-new piece with a popular musician and two commercials for large national brands.

In collaboration with the dynamic and diverse artist Nobuaki Kaneko, enra released a brand-new piece entitled “Firebird” that captures the raw creative energy of their serendipitous meeting. Capturing the cutting-edge artistic styles of both, the inspirational and exciting piece has now become a part of enra’s regular repertoire.

enra also produced an original work as a commercial for the wildly popular new coffee drink “Shiro no Hitotoki” from international brand Meiji, and the commercial went live on September 28. Marking the first time for enra to use projection from directly above, performers Yokoyama and Watatani appear in the piece, which expresses the meeting of coffee and milk.


About enra
Tokyo-based enra achieved viral video success in the United States after their performance for the 2020 Tokyo Olympic bid was picked up online, and their official YouTube channel has since amassed millions of views. Since that first big performance, enra has been invited to perform at theaters and festivals around the world, including the Cannes Film Festival in France and a successful audition on America's Got Talent. They have performed in 26 different countries on 6 continents to overwhelming acclaim in four and a half years since their founding.