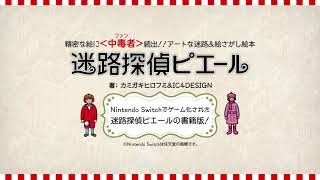 "Pierre the Maze Detective", the award-wining meticulous picture book, sold in over 30 countries with more than 858,000 copies, with mystery solving and maze hunting all become vivid in a Game. More than 100 collecting games in a variety of scenes and full of playful elements, it’s fun, beautiful and engaging!

Prior to the Nintendo Switch Summer Sale in 2021, the PC version will be available on Stream on 22nd June! Stay tuned!
https://store.steampowered.com/app/1421790/Labyrinth_City_Pierre_the_Maze_Detective/